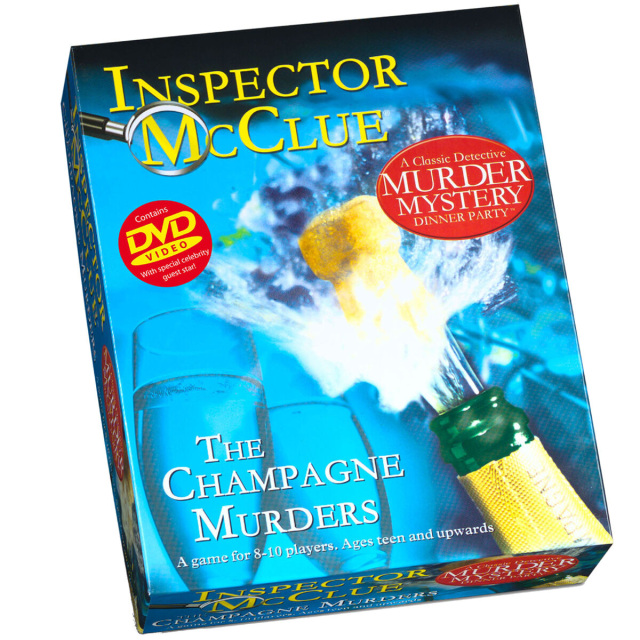 Serving up Murder, Mystery and Fun

A DVD Murder Mystery, including a cameo appearance by Michael Winner!

Everyone's a suspect when murder is on the menu. And with a Classic Detective Murder Mystery you have everything you need to serve up the perfect murder mystery dinner party.

In The Champagne Murders it's July 1967, the Summer of Love, and London still swings like a pendulum. In the Chelsea home of Lord Michael Jagged, a select group of fashionable young things have spent the weekend drinking champagne and partying.

As the guests gather for dinner on Sunday evening, however, they are met not by their host but by Scotland Yard detective Austin McClue, who brings them shocking news: Lord Jagged has been murdered! And they are the principal suspects in the policeman's enquiries!

Your task is to help McClue catch the killer. Or to avoid being caught...!

TERENCE SHRIMP - An East End boy whose success as a photographer has taken him into the most fashionable social circles.

MARTIN X - A reclusive political rights campaigner from America, whose presence in England is not strictly legal.

MARY-JANE FAITHLESS - Formerly the lover of Lord Jagged, now known as a pop star in her own right.

WIGGY - The most famous and glamorous model in the world, for this week at least.

KITTY KILLER - She looks like a sex starlet and claims to be a journalist, but everyone knows that really she's a secret agent.

BRIAN SEWER - The brilliant wine critic of the Evening Times whose snobbery and arrogance have endeared him to nobody. Unfortunately, his arrogance is justified.

TAMARA FARA-BUCKTOOTH - Famous for being famous, she is a regular fixture on the London social scene and is somehow related to Lord Jagged.

'CHAMPAGNE' CHARLIE BUNSON - A high-living entrepreneur whose connections with the London underworld have already attracted the attention of Scotland Yard.

BABS CRAYFISH - The girlfriend of 'Champagne' Charlie and a former nightclub-hostess, she now claims to be a legitimate actress.

The game includes invitations: simply choose which of your friends play which devious suspect and invite them to come along as that character. Also included are menu suggestions, recipes and of course, a really tasty murder to solve! It will be drop-dead fun, and by the end of the evening, one (or more) of your friends will be caught out as the murderer!