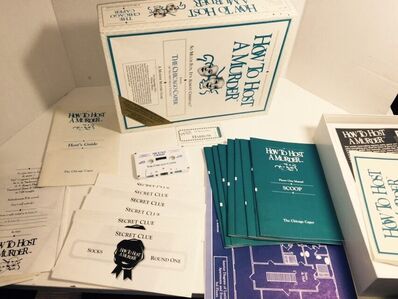 ​DINNER PARTY IN A BOX. It is a HOW TO HOST A MURDER Mystery Party Game from the folks who invented this genre of role playing game. You invite other couples or sets of singles over and they come dressed as parts you have assigned them, and then everybody eats and acts out a murder mystery, where you are guided in what your "character" reveals and knows.

Eventually, the murder is solved (even the hosts don't know who it is, unless they cheat [don't do it]) and everybody has had a wonderful evening of fun and food. There is a Party Planner Guide to help the hosts make everything work out, from the menu, to the decorations, and the invitations provide costume suggestions for the guests so they can get into their roles.

This one is Number 20 in the series and is called "THE CHICAGO CAPER, or "You Dirty Rat-a-Tat-Tat."

This one takes place in September of 1920 in Chicago, Illinois.

Here's the story line: "Chicago gang leader Harold "Hal" Coppone was released today from Awsume State Penitentiary near Philadelphia after serving a six-month term. Coppone, who was jailed for carrying an unlicensed weapon, was met by a group of his men - among them was Chicago gangster Joey "The Rattlesnake" Ratello, chief suspect in the recent killing of Marco "Machete" Molino - and departed quickly in a powerful seven-passenger Lincoln Touring car. While he had nothing to say to the press, Coppone and his men were undoubtedly headed back to Chicago where, it is rumored, they have more than one score to settle."

A host guide with instructions

​A sheet of secret clues

A diagram of the crime scene

Sold out
Add to Cart