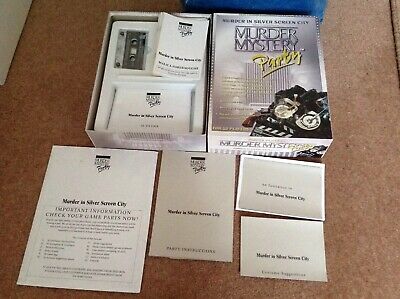 Murder mystery where each of 10 players take up the role of one of the suspects of the murder. This version is set in 1950's in Silver Screen City (Hollywood) and you have to find out who killed

Silver Screen City in the 1950s is the venue for a glittering party being hosted by the movie mogul Samuel O'Snuffit. But the evening went off with more of a bang than expected when O'Snuffit was shot dead during the firework display. Why did someone at the party want him dead? What had they to gain? Find out the answers by hosting your own party to solve the mystery of the Murder in Silver Screen City.

CECIL LETHARIO - film director (his love life has a cast of thousands!)

LOSTA MORALS - actress (fluent in five languages but never mastered how to say NO in any!)

FANNY CHEZ-LONGE - actress (she likes to audition lying down!)

CLARK CRUMPET - actor (he enjoys his tea after his crumpet!)

JOHNNY COME-LATELY - actor (the new kid on the block - better late than never!)

THE DONNE COSI-NOSTRA - hotel & casino owner (show this Godfather some respect or it could be good night goodfellas!)